THERE IS SOME DISAGREEMENT EVEN WITHIN THE BIBLE READING CHRISTIAN COMMUNITY A.K.A EVANGELICAL WHETHER OR NOT IF CHRISTIANS WILL FACE THE ANTICHRIST DURING THE LAST DAYS THIS VIEW IS UNPOPULAR in "Western" Christian thought and in many pulpits elevating a single point of view to a "SURE THING or the only possibility. The links on this page widen the exposure to various ideas, you are invited to make a more informed decision stepping outside of the walls we are exposed ​Tbelow video touches on the less popular thought process that at least warrants our attention.
OPPOSITE POINT OF VIEW from the above view. POLAR OPPOSITE   Read.watch both check it against scripture and ask God using his scripture. I rarely post false teaching. however initially it seems this author is sincere therefore this text link is offered for another point of view.
NOT my own personal view. I am still evaluating this issue.Knowing both points of view cannot hurt YET  THEY BOTH cannot be TRUE, One day someone will either claim to be God in the temple OR a bunch of followers of Christ will mysteriously disappear. or maybe there is another possibility. which I am ignorant of  at this time..Pray and decide. It is best to be exposed to  those positions that state believers will face the Antichrist and those  that assume it will be an EASY ESCAPE, but that seems too easy an answer which might appeal to tickling ears what people want to believe. ,3,4 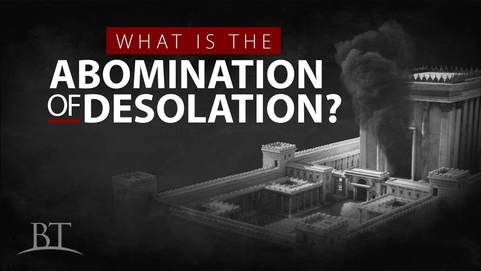 WHAT IF THE "WORLD'S GREATEST' deal maker [TRUMP & Jarrod K.] fail to bring PEACE to the Middle East? Will that be sufficient to convince people since the most effective negotiator earth has seen The Antichrist is truly sent from God? WHEN Donald J. Trump's  Middle East plan ultimately fails.
WHAT IF SOMEONE  succeeds,- a unique appealing individual [LET'S FACE IT our President is far from being universally liked and even despised by others.
What if another man who comes on the scene who looks like he ACCOMPLISHED THE ULTIMATE DEAL something many presidents have attempted (even  Donald J. Trump ​who claims to be the best dealmaker on planet earth fails to bring peace  y'know the author of the  "Art of The Deal"      Cannot make it happen with his best efforts, perhaps this would take a supernaturally led   MAN OF SIN   the above-mentioned Abomination to pull it off?